It's the holy war, idiots

It's the holy war, idiots

Shish kebabs and beer. Under the shade of the ramparts from the old wall of Melilla, my interlocutor -thirty years of complicit friendship- sits back in his chair and smiles bitterly. “They don’t realise, these idiots -he says-. It’s a war, and we’re in it. It’s the Third World War, and they don’t even realise”. My friend knows what he’s talking about, as he’s been a soldier in that war for a long time. An anonymous soldier, without a uniform. One of those who have often had to sleep with a gun under their pillow. “It’s a war -he insists, with his moustache into his beer head-. And we are losing it because of our stupidity. Smiling at the enemy”.

As I listen, I think about the enemy. And I don’t need to force my imagination, as during part of my life I inhabited that territory. The old habits, methods and different ways to exert violence, all is familiar to me. Everything repeats itself, in the same way as History repeats itself from the time of the Turks, Constantinople and the Crusades. Even since Thermopylae. Like it repeated itself in that Iran, where the unwary of over there and the imbeciles of over here applauded the fall of the Shah and the arrival of Khomeini the liberator and his ayatollahs. Like it repeated itself in the indiscriminate drooling over the various Arab Springs, which at the end -surprise for the professional idiots- ended up being preludes of very black winters. Winters which were to be expected, on the other hand, when the words “liberty” and “democracy”, Western concepts which our ignorance makes us believe can be exported sight unseen -just like that, trusting the goodness of the human heart-, end up being controlled by priests, imams, pastors, or whatever we want to call them, fanatics with or without a turban, who sooner or later make it a reality again, among their fanatic believers, what baron Holbach wrote in the 18th century: “When men believe that all they may fear is their god, they generally don’t stop at anything”.

Because this is Jihad, idiots. It’s the holy war. My friend in Melilla knows it. I, in the small area of my personal experience, know it, and whoever has been there knows it. Whoever has read History knows it, or whoever is able to face the newspapers and the television with lucidity. It is known to whoever searches on the internet for the thousands of videos and photographs of executions, of beheadings, of smiling kids showing off the men whose throats have been slit by their parents. Of women and children raped by infidels. Of adulteresses stoned to death -oh, how the ultra-feminists, so sensitive at other nonsense, keep silent about that-. Of murderers slitting throats live as they shout “Allahu akbar” and dozens of spectators recording it on their fucking mobile phones. It is known to whoever reads the signs that a Muslim child -not in Iraq, but in Australia- holds up with the writing “Behead all those who insult the Prophet”. It is known to whoever sees the sign exhibited by a young Muslim student -not in Damascus, but in London- where he warns: “We will use your democracy to destroy your democracy”. 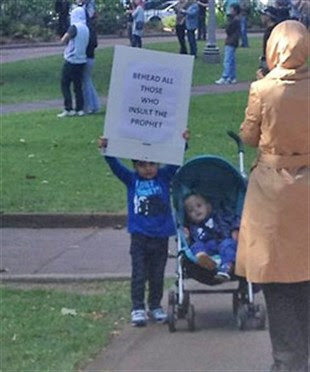 It took the West, Europe, centuries of suffering to reach the liberty it enjoys today: to be able to be an adulteress without being stoned, or to blaspheme without being burnt alive or hanged from a crane. To wear a short skirt without being called a whore. We now enjoy the advantages of that fight, earned after many battles against our own fanaticism, in which too many good people lost their lives, battles which the West fought when it was young and it still had faith. But now the young ones are others: the boy with the sign, the beheader, the fanatic willing to carry before him thirty infidels and then reach Paradise. In historical terms, they are the new Barbarians. Europe, where liberty was born, is old, demagogical and a coward, while radical Islam is young and brave, and they have hunger, and desperation, and balls, both the men and the women, in their right place. They don’t care a fig about looking badly on YouTube: on the contrary, it’s another weapon in their war. They work with their god in one hand and terror in the other, for their own clientele: for an Islam that could be peaceful and liberal -and that often wants to be, but can never achieve it fully-, trapped in its own socio-theological contradictions. To believe that you can fix that by negotiating or by looking the other way is much more than an immense stupidity. It’s a suicide. Look at the internet, I insist, and tell me what the hell are we going to negotiate. And with whom. It’s a war, and there’s nothing else to do but to face it, to accept it without any kind of complex. Because the battlefront is not only there, on the other side of the TV set, but here too. In the very heart of Rome. Because -I believe I wrote this some time ago, although maybe it wasn’t me-, it is contradictory, dangerous and even impossible to enjoy the advantages of being a Roman and at the same time to applaud the Barbarians.